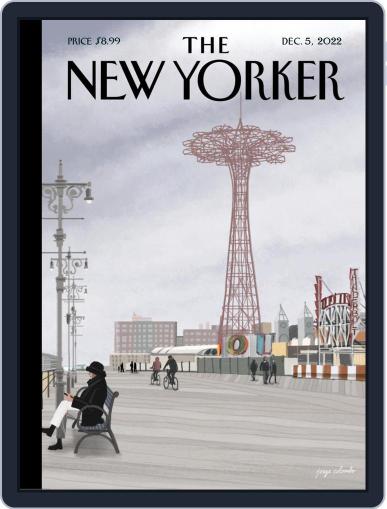 About The New Yorker

Renowned for its satirical take on contemporary politics, authoritative tone on pressing issues, and over-the-top illustrations, the New Yorker has long since established itself as a highly regarded magazine and a multiple award-winning National Magazine Award recipient. To the millions who enjoy the New Yorker’s sophisticated, multi-layered diction and creative takes, it has provided a sense of humor and metaphoric twists on otherwise serious topics. Read all about the past and current times featuring revered writers, and journalists who seek to inform and entertain.

Beginning in 1925, the magazine hit the streets with sophisticated humor and gripping short stories from some of the 20th centuries most influential writers. Social, political and economic hot topics, The New Yorker’s bread and butter, were discoursed through serious fiction, essays, and journalism. Much of their non-fiction content featured diverse topics and was regularly regarded for its “feuilleton” style.

A stand-out feature for the New Yorker is often their illustrations. Usually coming in the form of gag cartoons, the magazine is known for satirizing political and social undertones in one fell swoop. The New Yorker, since its inception, has had a long line-up of important American cartoonists who have captured current events in a wholly unique way.

Another popular feature within every issue includes the New Yorker’s crossword puzzles. If you are looking to exercise your brain and use your critical thinking muscles, you will find a good challenge with the New Yorker’s puzzles.

Featured in films, nonfiction & fiction alike, The New Yorker’s influence goes beyond the streets and magazine racks. In times of great strife, the magazine has regularly procured Top 10 magazine cover awards of the year. This is coupled with the work of many important American journalists and editors who delivered on groundbreaking stories, current events, political campaigns and much more. The magazine is a multi-count recipient of more National Magazine Awards than any other magazine due to its ground-breaking reporting, creative satire, and authoritative analysis.

The number of issues included in a magazine subscription (frequency) is subject to change without notice. Additional double issues may be published, which count as 2 issues. Applicable sales tax will be added. Offer void in Vermont. Magazine covers are used for illustrative purposes only and you may not receive a copy of the particular issue depicted. Your subscription will include the most recent issue once your subscription begins. Magazine covers are the property of the publisher. This site is not officially affiliated with, associated with, or endorsed by The New Yorker or the publisher.