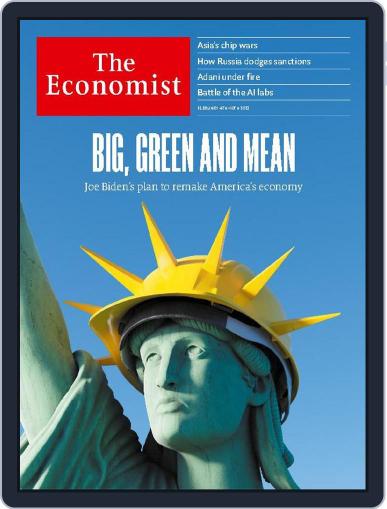 About The Economist Digital

RENEWAL ORDERS: We can only renew your order if you have ordered The Economist from DiscountMags in the past. If you have previously ordered from another source, you must renew your subscription through the same company you originally purchased it from. We cannot combine duplicate accounts.

The Economist is renowned for its weekly authoritative focus on businesses and global politics. With extensive coverage of the latest international news, politics, market trends, and current events from around the world, the publication stays in the front line of all your essential news needs. True to its name, the Economist magazine generates comprehensive reporting on the state of the world’s finances and how current events may sway the influence of the economies around the world. This in tandem with keeping its readers up to date with the newest scientific and technological advancements have made The Economist a foundational, reliable, and credible magazine.

History of The Economist

Founded in 1843, by Scottish economist James Wilson, the magazine was first formed in retaliation to the Corn Laws, which were a system of tariff imports. The magazine soon found its footing and tone in political and economic matters throughout the United Kingdom. As the mid-20th century approached, the magazine reinvented itself with fresh new formats, political opinion columns, cartoons, and a plethora of thought-provoking reads. The Economist magazine's brand awareness was recognized by their staple fire-engine-red nameplate. Readers who gravitate towards ideas of neoliberal economics, free markets, trade, immigration, and globalization will find everything they need in The Economist magazine.

The Economist holds a primary focus on politics, world events, businesses, and the symbiotic relationship that binds it all together. The magazine also offers a variety of content surrounding science, technology, literature, and even the arts. One defining feature that readers can look forward to is the bi-weekly special reports that can be found throughout the magazine. These reports touch on the granular details that affect any of the various topics covered in the Economist magazine. The four significant categories that readers gravitate towards are Business, Countries & Regions, Finance & Economics, and Science & Technology. With regard to technology, the Economist magazine takes special note of the relationship between humanity’s progression and technological advancement. That is why readers are treated to a feature known as Technology Quarterly: a look into how new technological advancements and inventions can help innovate human life even further.

What to Expect: The Economist Digital Magazine + DiscountMags

All of this is available to you through DiscountMags! Get your fill on political and economic matters with The Economist magazine and DiscountMags.

The number of issues included in a magazine subscription (frequency) is subject to change without notice. Additional double issues may be published, which count as 2 issues. Applicable sales tax will be added. Offer void in Vermont. Magazine covers are used for illustrative purposes only and you may not receive a copy of the particular issue depicted. Your subscription will include the most recent issue once your subscription begins. Magazine covers are the property of the publisher. This site is not officially affiliated with, associated with, or endorsed by The Economist Digital or the publisher.