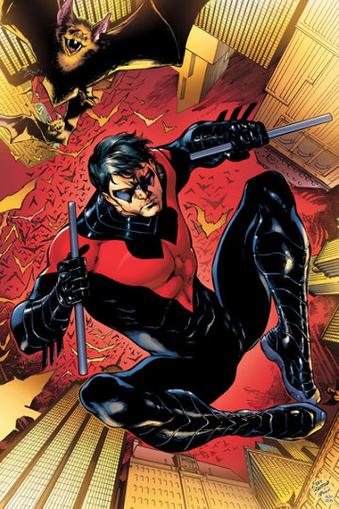 Not much attention is devoted to those heroes who are merely the sidekicks to the heroes that are known so well. That isn’t the case with Nightwing. Follow along in your comic subscription to learn about the transition that Wonder Boy experiences as he turns into a respected hero in his own right. Order your discount subscription to the adventurous life of Nightwing.

As a child, when Dick Grayson lost his family through brutal homicides, Bruce Wayne decided to take him in and take care of him. It wasn’t long before Bruce shared his secret life with young Dick and he became the famous sidekick of the Batman and Robin duo. Together they protected Gotham for a while, but then Dick grew tired of always second in command and started out on his own. While keeping to what he was taught by Batman, he became Nightwings and a member of the superhero pantheon.

Growing up in an acrobatic family that traveled with a circus, Dick had learned many skills to aid him with his superhero exploits. He is an exceptional gymnast due to his upbringing. His other abilities include combat strategy, and, outstanding detective and deductive skills. He also received excellent skills from his time with Batman, including his martial arts skills as well as his advanced technology.

Follow along with Nightwing as he protects Gotham from those who break the law. Anyone who does decide to break the law suffers swift recompense through a short and likely painful trip to Arkham. Even though many of his methods are similar to those of Batman, Dick is determined to not become as depressed and lonely as Bruce. You will have to subscribe to see if Nightwings can successfully avoid cynicism, and yet still be as successful as Batman has been.

Order your discount subscription to Nightwings comic to follow along with the adventures of the grown Boy Wonder!

Magazine covers are used for illustrative purposes only and you may not receive a copy of the particular issue depicted. Your subscription will include the most recent issue once your subscription begins. Magazine covers are the property of the publisher. This site is not officially affiliated with, associated with, or endorsed by Nightwing or the publisher.