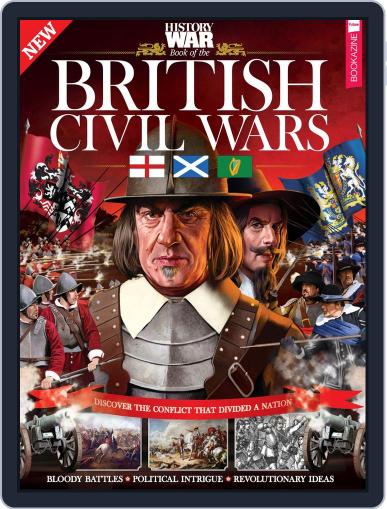 About History Of War Book Of The British Civil Wars

The mid-17th century was one of the most explosive periods in history across the British Isles. In England, a desperate king fought bitterly against his defiant Parliament; in Scotland religious turmoil sparked invasions from the north; and in Ireland, an oppressive regime led to an all-out Catholic rebellion. In this bookazine, we explore the how all these events, and more, combined to make up the British Civil Wars, from the political machinations of Parliament to the bloody battlefield clashes at Edgehill, Naseby and Marston Moor. We follow the meteoric rise of Oliver Cromwell and his New Model Army, as well as the tragic decline of Charles I – a king executed by his own subjects. We also investigate how the countries transformed in the period of Interregnum, for better and for worse, before taking a look at how the monarchy made a stunningly peaceful return during the Restoration. Whether you’re an enthusiastic novice or a seasoned history buff, there are a wealth of expert features, illustrated battle maps and superb imagery for you within these pages. Featuring: Kingdoms at war - Explore the turbulent political scenes in England, Scotland and Ireland that sowed the seeds of war. King vs. Parliament - Naseby, Marston Moor and the execution of Charles I – experience the brutality of the Civil Wars. Cromwell’s reign - Discover how some prospered and other suffered under the Lord Protector’s authoritarian rule. Road to Restoration - Follow the political machinations that brought down the Protectorate and restored the British monarchy.

The number of issues included in a magazine subscription (frequency) is subject to change without notice. Additional double issues may be published, which count as 2 issues. Applicable sales tax will be added. Offer void in Vermont. Magazine covers are used for illustrative purposes only and you may not receive a copy of the particular issue depicted. Your subscription will include the most recent issue once your subscription begins. Magazine covers are the property of the publisher. This site is not officially affiliated with, associated with, or endorsed by History Of War Book Of The British Civil Wars or the publisher.