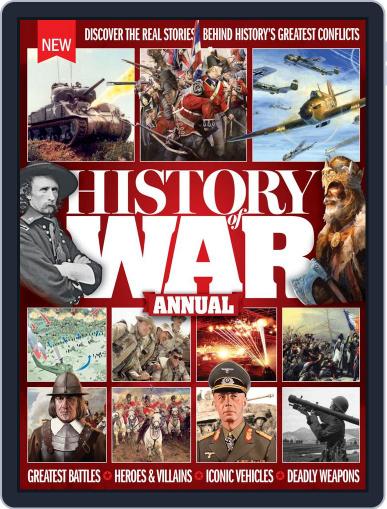 About History Of War Annual

This year has marked 100 years since WWI’s most significant and tragically bloody campaigns: Verdun and the Somme. From the desperate struggle for Fort Douaumont, to the disastrous British attack on 1 July, the History of War Annual is packed with the heroic stories, critical details and expert analyses that bring these and many more battlefields to life. Featuring: 20 Bloodiest Battles - Take a look at some of the costliest victories and defeats that have left their own chilling mark in military history and changed the world in the process. Alfred the Great’s Viking War - Discover how army reforms, cunning tactics, and England’s first ever navy helped to finally defeat the invading Danes. Great Battles: 1 July 1916 - It remains the most disastrous single day in the British Army’s history, but what actually happened on the first day of the Somme and why did it go so wrong? Ardennes: Hitler’s Revenge - Follow the chaos and catastrophe as the Nazi war machine makes its last desperate offensive of WWII, and pushes the Allies to breaking point.

Magazine covers are used for illustrative purposes only and you may not receive a copy of the particular issue depicted. Your subscription will include the most recent issue once your subscription begins. Magazine covers are the property of the publisher. This site is not officially affiliated with, associated with, or endorsed by History Of War Annual or the publisher.