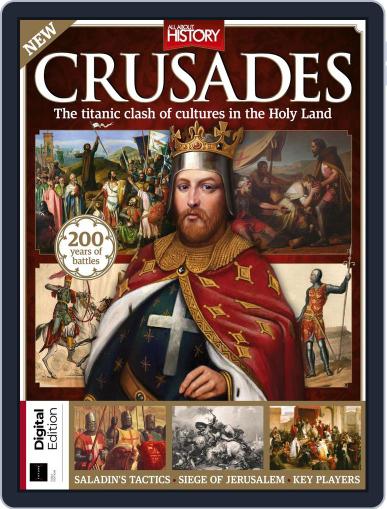 In the 11th century the Christian Byzantine Greeks of the Byzantine Empire were under pressure from the forces of the Seljuk Turks. Pope Urban II, leader of the Roman Catholic Church, called for a great expedition to help relieve that pressure and liberate the Holy Land from the Muslims. The subsequent crusades over the next 200 years changed the face of the Holy Land forever, and ruined any goodwill in the relationships between Christians and Muslims, and between Roman Catholic Christians and Greek Orthodox Christians. In the All About History Book of the Crusades you will discover the historical and religious background to the crusades, the dramatic battles and political intrigue and what everyday life was like in Outremer. Uncover the true stories of crusading heroes and their rivalries, such as King Richard the Lionheart and Sultan Saladin. This is the perfect handbook for anyone on a quest for knowledge about this tumultuous period of history.

The number of issues included in a magazine subscription (frequency) is subject to change without notice. Additional double issues may be published, which count as 2 issues. Applicable sales tax will be added. Offer void in Vermont. Magazine covers are used for illustrative purposes only and you may not receive a copy of the particular issue depicted. Your subscription will include the most recent issue once your subscription begins. Magazine covers are the property of the publisher. This site is not officially affiliated with, associated with, or endorsed by Crusades or the publisher.