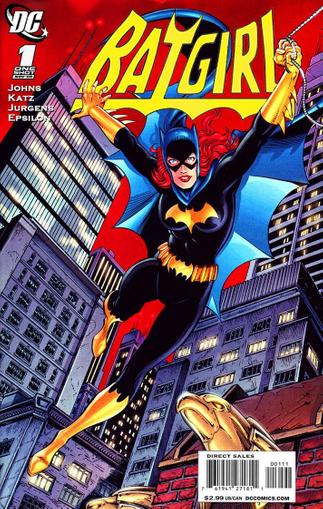 Batgirl is the comic book series featuring Barbara Gordon. Barbara is the daughter of Gotham City’s best police officer, Commissioner Gordon. She is a strong willed and confidant young woman who has taken her father’s morals to heart. Follow along in the Batgirl comic to learn more about your favorite heroine. Order your  discount subscription today!

Barbara Gordon is an intelligent young woman who has grown up in the shadow her influential father and the iconic Batman. She is as committed to justice as either of them and when her father tries to protect her by refusing to allow her to join the police force, she takes her future into her own hands. She decides that if she cannot be a member of the force, then she will become a crime-fighting vigilante like the admired Batman and call herself, “Batgirl.”

Batgirl has many powers to help her in her quest for justice. Like Batman, she is a skilled martial artist, combat strategist, and favors advanced technology. Her exceptional fighting skills are put to good use as the fights the criminals of Gotham City. Barbara Gordon also has her father’s detective skills, as well as prodigious computer skills that help her, and Batman, out of many hairy situations. Learn more about her abilities by subscribing to this comic.

Subscribe to the Batgirl comic book series to learn how Barbara adjusts to her role of Batgirl. She is a woman with a mission and fights for justice in Gotham City regardless of what her father and Batman want her to do. But even with her utility belt full of batarangs and her batcycle, she still comes nearer to death each time she encounters one of the criminals of Gotham City.

Learn more about the interplay between Batgirl and Batman and how Barbara adjusts to her new role as heroine of Gotham City by ordering your discount subscription today!

Magazine covers are used for illustrative purposes only and you may not receive a copy of the particular issue depicted. Your subscription will include the most recent issue once your subscription begins. Magazine covers are the property of the publisher. This site is not officially affiliated with, associated with, or endorsed by Batgirl or the publisher.