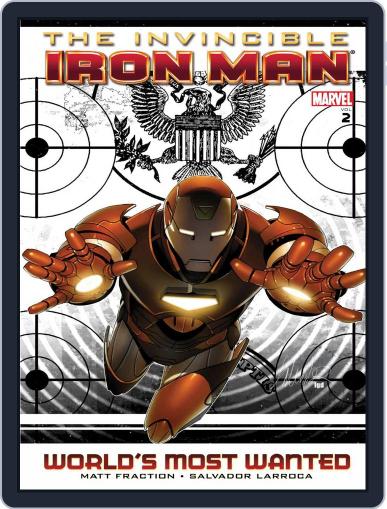 IRON MAN! You know you love him! And as the summer's most anticipated movie boot-jets its way into theaters, here's the perfect jumping-on point for new readers and Iron Man fans alike! Tony Stark - Iron Man, billionaire industrialist and director of S.H.I.E.L.D. - faces the most overwhelming challenge of his life. Ezekiel Stane, the son of Tony's late business rival and archenemy Obadiah, has set his sights, his genius and his considerable fortune on the task of destroying Tony Stark and Iron Man. What's worse, he's got Iron Man tech, and he's every bit Iron Man's equal and opposite...except younger, faster, smarter...and immeasurably evil. Rising star writer Matt Fraction (IMMORTAL IRON FIST) and superstar artist Salvador Larroca (UNCANNY X-MEN) join forces to repulsor-ray your comic books to a cinder!

Magazine covers are used for illustrative purposes only and you may not receive a copy of the particular issue depicted. Your subscription will include the most recent issue once your subscription begins. Magazine covers are the property of the publisher. This site is not officially affiliated with, associated with, or endorsed by Invincible Iron Man or the publisher.