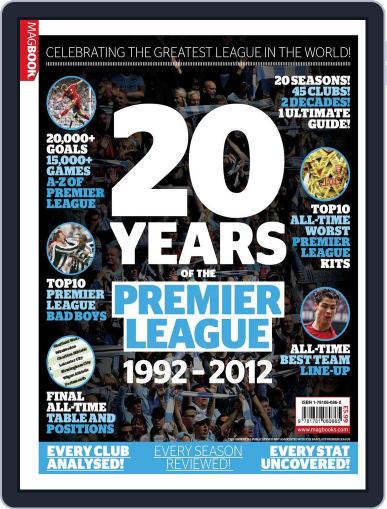 The Best League in the World: 20 years of The Premier League Magazine (Digital)

About The Best League in the World: 20 years of The Premier League

The climax to the Premier League’s 20th season was the most nail-biting, the most dramatic and the most downright exciting since it began in 1992. We’ve looked at the Premier League lives of all the 45 clubs that have played in the top flight since 1992/93, from Man Utd down to Swindon Town. We’ve looked at every season: the stories, the scandals, the stars and the sensations – and printed the all-time Premier League table in full. We’ve compiled top tens on everything from Magic men to Memorable Moments. There’s an A to Z covering everything from Roman Abramovich to Gianfranco Zola via Jean-Marc Bosman. We’ve also listed all the most diverting facts and stats. If you want to know anything about the last 20 years of the Greatest League in the World, this is not a bad place to start.

The number of issues included in a magazine subscription (frequency) is subject to change without notice. Additional double issues may be published, which count as 2 issues. Applicable sales tax will be added. Offer void in Vermont. Magazine covers are used for illustrative purposes only and you may not receive a copy of the particular issue depicted. Your subscription will include the most recent issue once your subscription begins. Magazine covers are the property of the publisher. This site is not officially affiliated with, associated with, or endorsed by The Best League in the World: 20 years of The Premier League or the publisher.