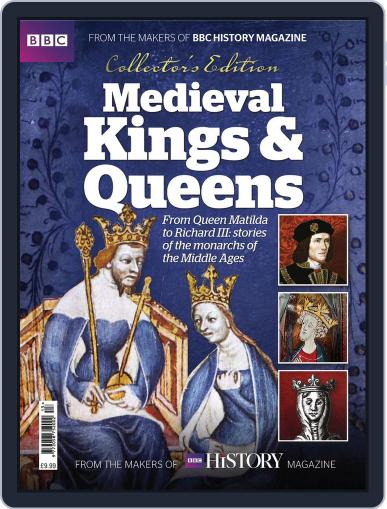 About Medieval Kings and Queens

Meet the colourful monarchs who reigned though some of Britain’s most tumultuous and dramatic centuries Inside you will discover: -A timeline of key milestones, from the Norman conquest to the fall of Richard III at the battle of Bosworth -The regal women who stamped their mark on medieval Britain: Matilda, Isabella of France and Eleanor of Aquitaine -The motives and military exploits of Henry V, Edward I and Richard the Lionheart -How Owain Glyndwr and Robert Bruce fought English rule in Wales and Scotland -The debates that still rage about Richard III and the death of Edward II -Civil Wars that rocked England, pitting Matilda against Stephen and York against Lancaster

The number of issues included in a magazine subscription (frequency) is subject to change without notice. Additional double issues may be published, which count as 2 issues. Applicable sales tax will be added. Offer void in Vermont. Magazine covers are used for illustrative purposes only and you may not receive a copy of the particular issue depicted. Your subscription will include the most recent issue once your subscription begins. Magazine covers are the property of the publisher. This site is not officially affiliated with, associated with, or endorsed by Medieval Kings and Queens or the publisher.