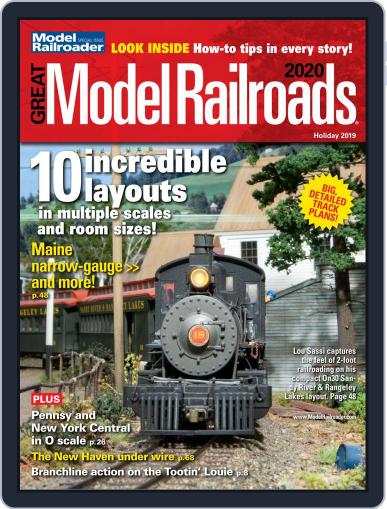 Great Model Railroads 2016 is the only publication that covers the world’s most impressive model railroads. Inside this special issue you’ll find 10 mesmerizing dream layouts that will inspire you to reach new heights with your own layouts. Stories include: • S scale modeler Dick Karnes has built a 12- by 39-foot “alternate-history” version of the New York, Westchester & Boston RR, a heavy electric line between New York City and Boston, set in 1955. • Clark Probst has built an accurate around-the-walls HO scale layout depicting the Minneapolis & St. Louis in Mason City, Iowa, set in the early years of diesel power. • HO modeler Tex Copsetta has built a 24- by 26-foot walk-in layout depicting the Southern Pacific RR in the 1950s as it climbs through the rugged Sierra Mountains from California into Oregon.

Magazine covers are used for illustrative purposes only and you may not receive a copy of the particular issue depicted. Your subscription will include the most recent issue once your subscription begins. Magazine covers are the property of the publisher. This site is not officially affiliated with, associated with, or endorsed by Great Model Railroads or the publisher.