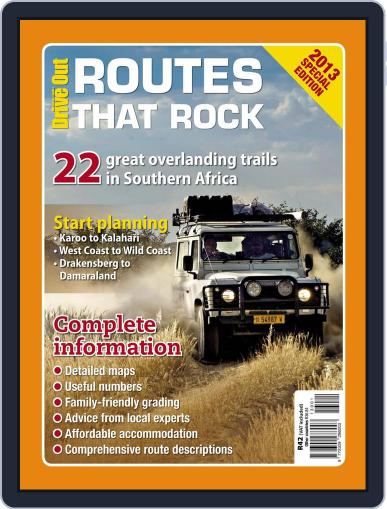 About Drive Out - Routes that Rock

Drive Out’s 2013 stand-alone title is a 128-page map-based guide, roughly based on the 24 routes featured in the magazine's popular Routes that Rock series. These accessible, affordable 4x4 routes include some of Southern Africa’s most scenic back roads and destinations. They're ideal for heading out on a long weekend, and are Drive Out's must-drives – at least once in your lifetime.The in-depth reviews will revisit the original routes featured in the last three years and expand upon them. With full maps, a complete description of the route, advice about what you can expect, when to go, where to stay… in fact, everything you need to know to plan your trip, including a suggested basic itinerary.

Magazine covers are used for illustrative purposes only and you may not receive a copy of the particular issue depicted. Your subscription will include the most recent issue once your subscription begins. Magazine covers are the property of the publisher. This site is not officially affiliated with, associated with, or endorsed by Drive Out - Routes that Rock or the publisher.