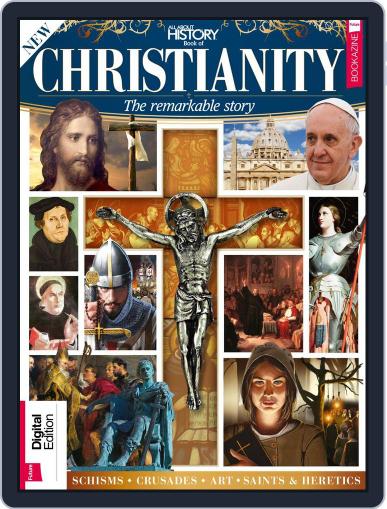 All About History: Book of Christianity Magazine (Digital)

About All About History: Book of Christianity

The story of Christianity is arguably history’s most extraordinary. From its humble beginnings, shrouded in myth and mystery, to its rise to imperial status, the All About History Book of Christianity tells a story more than 2,000 years in the making. Covering the myriad crusades, schisms, movements and individuals that have made Christianity what it is today, this is a must-read for curious enthusiasts and history buffs alike. Discover how Christians went from being a minority group persecuted by the Roman state to becoming the official religion of the Roman Empire, gaining followers exponentially. Follow England’s King Richard the Lionheart on his quest to liberate the Holy Land and learn about the founding of the Knights Templar. Understand the roots of the Protestant Reformation and how it spread across Europe, changing Christianity forever. Find out how Christianity navigated the global conflicts of the 20th century, and how the worldwide faith plans to face the challenges of the 21st century.

The number of issues included in a magazine subscription (frequency) is subject to change without notice. Additional double issues may be published, which count as 2 issues. Applicable sales tax will be added. Offer void in Vermont. Magazine covers are used for illustrative purposes only and you may not receive a copy of the particular issue depicted. Your subscription will include the most recent issue once your subscription begins. Magazine covers are the property of the publisher. This site is not officially affiliated with, associated with, or endorsed by All About History: Book of Christianity or the publisher.