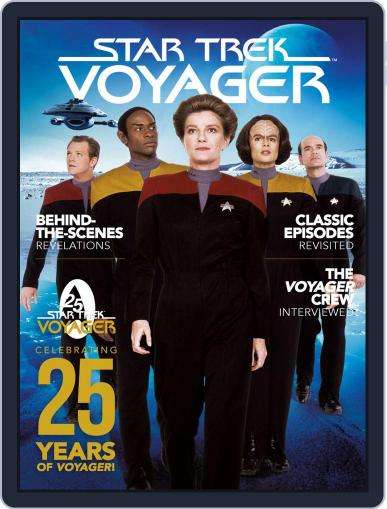 "The cast and crew of Star Trek: Voyager take a unique look back at the groundbreaking series.nnCelebrating a quarter century since the series first began, the Star Trek: Voyager 25th Anniversary Special is an essential guide to the U.S.S. Voyager’s exploration of the Delta Quadrant. Drawing on interviews with the cast and crew, this book charts Voyager’s incredible seven-year journey from beginning to end, from Caretaker to Endgame.nnFeaturing an exclusive new interview with Kate Mulgrew, plus a season-by-season guide, on-set reports, and spotlights on production design and visual effects, the Star Trek: Voyager 25th Anniversary Special is the ultimate companion to the show that took the Star Trek franchise further than it had ever been before…"

Magazine covers are used for illustrative purposes only and you may not receive a copy of the particular issue depicted. Your subscription will include the most recent issue once your subscription begins. Magazine covers are the property of the publisher. This site is not officially affiliated with, associated with, or endorsed by Star Trek: Voyager 25th Anniversary Special or the publisher.