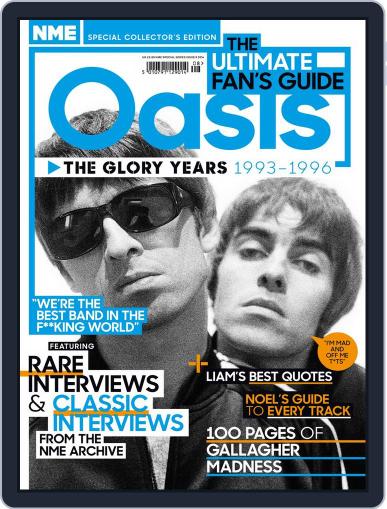 This year, Oasis’ first two albums – ‘Definitely Maybe’ and ‘(What’s The Story) Morning Glory? – have been reissued. Looking back now, and taking the current music scene into consideration, it’s hard to imagine how big, how culturally relevant and how all-conquering Oasis were from 1994 – 1996. In his new book about ‘Definitely Maybe’ for the 33 1/3 series, author Alex Niven sums it up like so: ‘Oasis wrote songs that came closer to narrating the collective hopes and dreams of a people than any other band in the last quarter century.’ They sold more albums than any other band. They played bigger gigs than any other band. They had more newspaper articles written about them than any other band. They were better than any other band. And this NME Collector’s Edition is an attempt to bottle up and present the wild spirit of the times: Liam’s charisma, Noel’s inability to write a bad song, the hope, optimism and chaos that followed the band. Over 100 pages it tells the story of every song they wrote, recorded and released during the time, delves into the NME, Melody Maker and VOX archives to pick out some classic interviews, and builds up to the peak of their career: playing to a quarter of a million people at Knebworth Park in August 1996. Liam Gallagher, Noel Gallagher, Paul ‘Guigsy’ McGuigan, Paul ‘Bonehead’ Arthurs, Tony McCarroll and Alan White: you changed thousands of lives just by being you. Live forever.

The number of issues included in a magazine subscription (frequency) is subject to change without notice. Additional double issues may be published, which count as 2 issues. Applicable sales tax will be added. Offer void in Vermont. Magazine covers are used for illustrative purposes only and you may not receive a copy of the particular issue depicted. Your subscription will include the most recent issue once your subscription begins. Magazine covers are the property of the publisher. This site is not officially affiliated with, associated with, or endorsed by NME Special Collectors´ Magazine - Oasis or the publisher.