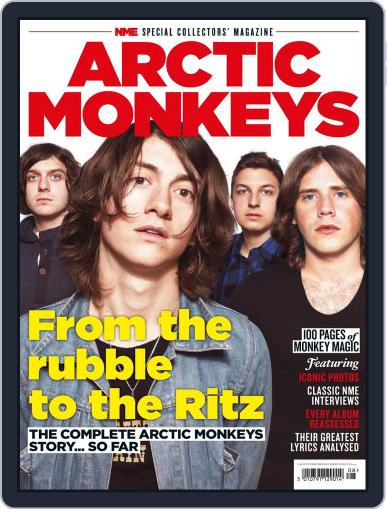 Monkey mania! In the wake of their triumphant Glastonbury headline set and with their fifth album 'AM' upon us, NME has scoured the archive for the biggest, best and most revealing interviews the Arctic Monkeys have ever given for a special 100-page collector's edition magazine on this sensational band, the most comprehensive guide to one of the 21st Century's biggest rock success stories. Plus, we've reassessed every album, rediscovered classic photos from every era, explored the meanings behind Alex Turner's greatest lyrics and brought their greatest characters to life, from Brian Storm to the scummy man! Suck (by which we mean 'read') it and see.

Magazine covers are used for illustrative purposes only and you may not receive a copy of the particular issue depicted. Your subscription will include the most recent issue once your subscription begins. Magazine covers are the property of the publisher. This site is not officially affiliated with, associated with, or endorsed by NME Special Collectors’ Magazine: Arctic Monkeys or the publisher.