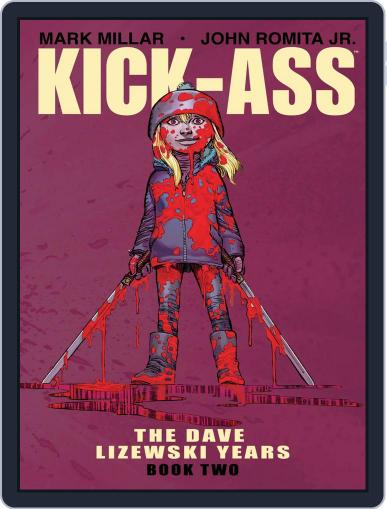 About Kick-Ass: The Dave Lizewski Years

This month marks 10 YEARS OF KICK-ASS the greatest superhero comic of all time! It's been a decade since teen comic book nerd Dave Lizewski donned his homemade Kick-Ass costume and took to the streets of NYC to fight the city's hardest criminals. This New York Times bestseller became a worldwide phenomenon overnight, spending three months at the top spot on the Diamond Direct Market chart and spawning the KICK-ASS movie that opened at No.1 in the box office! To celebrate the launch of the NEW KICK-ASS series, all four volumes of KICK-ASS: THE DAVE LIZEWSKI YEARS are being released through Image Comics. Relive what happens when Dave Lizewski asks himself "How come nobody's ever become a superhero before?" and makes his teenage superhero daydreams an ass-kicking reality. Superstar creators MARK MILLAR and JOHN ROMITA, JR. present this true 21st-century classic

Magazine covers are used for illustrative purposes only and you may not receive a copy of the particular issue depicted. Your subscription will include the most recent issue once your subscription begins. Magazine covers are the property of the publisher. This site is not officially affiliated with, associated with, or endorsed by Kick-Ass: The Dave Lizewski Years or the publisher.