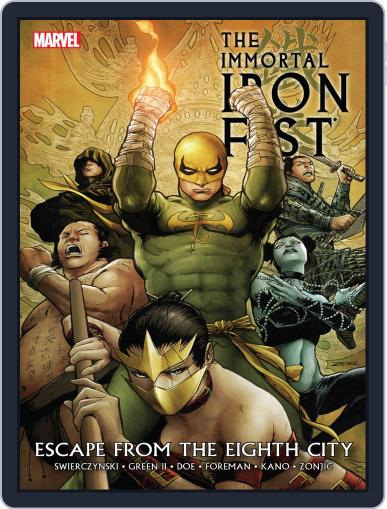 Two words, punks...BATTLE ROYALE! All the losers in the tournament in the Heart of Heaven get a chance to redeem themselves and obtain the ultimate victory...Danny Rand included! But if Danny couldn't win mano a mano, what hope does he have in a no-holds-barred kung-fu free-for-all of violence and carnage? And meanwhile, on Earth, the sinister Xao launches an attack almost a century in the making, and he won't stop until he's dancing on the ashes of K'un-Lun itself. Oh! And the final secrets of Danny Rand's birth are finally revealed. And this ain't even the finale, sweethearts. By Ed and Matt and David and Kano and Kaare and so on and so forth.

Magazine covers are used for illustrative purposes only and you may not receive a copy of the particular issue depicted. Your subscription will include the most recent issue once your subscription begins. Magazine covers are the property of the publisher. This site is not officially affiliated with, associated with, or endorsed by Immortal Iron Fist or the publisher.