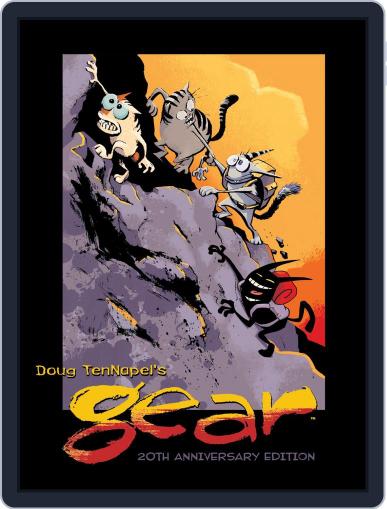 Four incompetent cats hijack a giant killer robot to change the course of a war between cats, dogs, and insects. But while these three species fight for control of the world, a powerful mechanical being named GEAR arrives to risk his own life to save the lives of good cats. This printing has everything: robots, harpoon guns, talking cats, mantis kung fu, and pin-up art by ROB SCHRAB and MIKE MIGNOLA! Writer and artist DOUG TENNAPEL (Earthworm Jim) and colorist KATHERINE GARNER present an updated-but-faithful 20th ANNIVERSARY edition of GEAR, an Image Comics classic for cat, dog, and insect lovers of all ages!

Magazine covers are used for illustrative purposes only and you may not receive a copy of the particular issue depicted. Your subscription will include the most recent issue once your subscription begins. Magazine covers are the property of the publisher. This site is not officially affiliated with, associated with, or endorsed by Gear or the publisher.