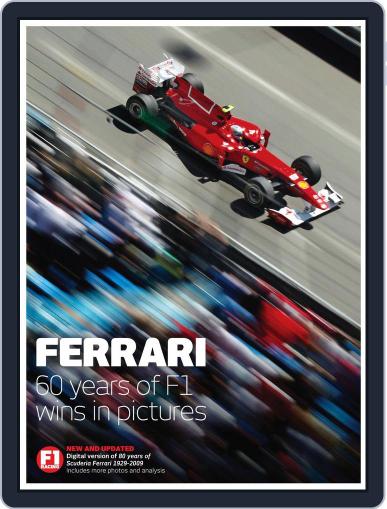 About Ferrari - The world's greatest F1 team in pictures

With over 180 pages, this specially designed iPad app celebrates the history of Scuderia Ferrari and their 60 years of Formula One victories. Analysing each decade since the F1 World Championship began, as well as the pre-1950 era, the app includes stunning photography of many of Ferrari’s greatest ever victories – from their first ever Formula One win at Silverstone in 1951, to Fernando Alonso’s stunning victory at the same circuit this year. Originally published in print in 2009 as 80 years of Ferrari. This version includes new images/editorial.

The number of issues included in a magazine subscription (frequency) is subject to change without notice. Additional double issues may be published, which count as 2 issues. Applicable sales tax will be added. Offer void in Vermont. Magazine covers are used for illustrative purposes only and you may not receive a copy of the particular issue depicted. Your subscription will include the most recent issue once your subscription begins. Magazine covers are the property of the publisher. This site is not officially affiliated with, associated with, or endorsed by Ferrari - The world's greatest F1 team in pictures or the publisher.