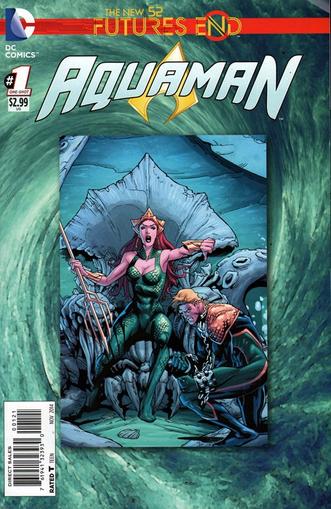 From DC Comics, comes the new Aquaman! For over 70 years, he has been a superhero icon standing alongside the Justice League to protect those who are in danger. He is known as the King of the Seven Seas and Reluctant Ruler of Atlantis. Due to his duel citizenship in Atlantis and in the surface world, he is not as well known as other members of the Justice League, but you will love his thrilling adventures nonetheless. Order the Aquaman comics today to read about the daring adventures in Atlantis and the Seven Seas.

Aquaman is a classic, American coming of age story you will love regardless of your own age. Arthur Curry grows up and attempts to find his place in the world, but soon discovers that he was born in Atlantis, but was raised on land. Curry becomes a superhero who is determined to protect both his birthplace of Atlantis and the surface world above, even though they are constantly in conflict. Super villains take the opportunity to spur on the conflict and cause even more issues for Aquaman.

Aquaman has a unique set of supernatural powers due to his duel citizenship both in Atlantis and the surface world. You will love reading about his telepathic ability to communicate with sea life that gives him control over sea animals. Since he was born in Atlantis, he can withstand ocean depths, breathe under water, and swim faster than any other creature. Not only will you love those supernatural powers, but also his surface powers of superhuman strength, enhanced senses and durability. When you subscribe to the comic, you will be able to read about Aquaman’s adventures protecting Atlantis against innumerable foes. There will even be special appearances by members of the Justice League and The Others.

No matter where you are in your life, you can find something to relate to in the Aquaman Comics series. Whether you see similarities between yourself and Arthur Curry or his alter ego or you see the benefit of respecting the ocean, this comic has something for every reader. Order your discount Aquaman magazine today!

Magazine covers are used for illustrative purposes only and you may not receive a copy of the particular issue depicted. Your subscription will include the most recent issue once your subscription begins. Magazine covers are the property of the publisher. This site is not officially affiliated with, associated with, or endorsed by Aquaman or the publisher.