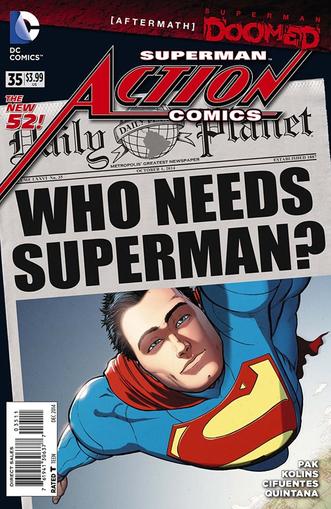 Superman is one of the most iconic superheroes in all of comic book history. Follow his latest attempts at saving the world in Superman Action Comics. Each issue will provide you with harrowing adventures of the Man of Steel protecting both mankind and justice, except this time, he is fighting a version of himself. Order your discount subscription today!

Lex Luthor is set upon turning those who live in the city of Metropolis against Superman. He releases a virus on the city that has the capacity to rewrite the DNA of those infected. Not even Superman is capable of withstanding this virus. Although he is able to fight off the virus thanks to his super abilities, there is still a hybrid form of him created through the rewriting of his DNA. This new version of the iconic hero seeks to defeat the Man of Steel and discredit him with the people. Follow along in the Superman Action Comics as Lex Luthor’s plan unfolds and your hero fights to defeat it.

Superman Action Comics stars Superman, Lex Luthor, and Dru-Zod. Originally Kal-El, and now Clark Kent, originated from the planet, Krypton. An iconic power for good masquerading as a reporter, this hero has stolen the hearts of millions. While most people see Superman as one of best things to happen to Metropolis, Lex Luthor believes him to be a threat to the whole population. He seeks to get rid of the Man of Steel, or at the very least, turn the people against him. Dru-Zod is the second villain in this comic series. He was once the greatest military general on Krypton, but after committing severe crimes, was sentenced by Kal-El’s father to interdimensional prison. Now he is out and seeking revenge against the only surviving son of his captor: Superman.

The Man of Steel’s powers include super strength, flight, invulnerability, heat vision, super speed, x-ray vision, freeze breath, superhuman hearing, and the ability to heal. Lex Luthor has a genius-level intellect, inexhaustible wealth, and heavy political influence. While not powers in the traditional sense, they provide ample ammo for Lex Luthor to take advantage of. Dru-Zod gains the same powers as Kal-El received when he was exposed to Earth’s yellow sun. Dru-Zod and Superman are evenly matched, and it will be interesting to see them fight with one another. You will enjoy reading of the interplay between these three character’s powers as you read your subscription to Action Comics Superman!

Order your discount subscription to the Superman Action Comics series today to start following your favorite superhero in his latest adventures!

Magazine covers are used for illustrative purposes only and you may not receive a copy of the particular issue depicted. Your subscription will include the most recent issue once your subscription begins. Magazine covers are the property of the publisher. This site is not officially affiliated with, associated with, or endorsed by Action Comics Superman or the publisher.