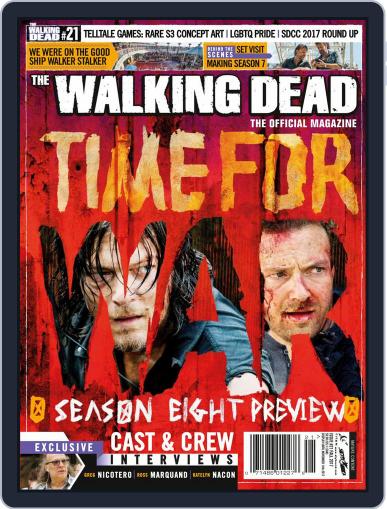 About The Walking Dead United Kingdom

The Walking Dead: The Official Magazine features an inside look at the AMC TV show and comic as only a fully sanctioned quarterly can! Get exclusive access to all areas of the smash-hit cable drama, you'll hear from all of the leads and characters on the hit TV show, go behind-the-scenes with SFX talent and see how they create the greatest on-screen zombies ever! Plus! Delve into The Walking Dead comic with Kirkman to find out what's coming up for our survivors, and see how artist Charlie Adlard keeps up with the fast pace of the monthly comic! The Walking Dead: The Official Magazine is 100 pages of all-access, no-holds-barred action. You can’t get more insider than this. Every issue is packed with all the latest news, exclusive revelations and jaw-dropping secrets for fans of the comic and television show!

Magazine covers are used for illustrative purposes only and you may not receive a copy of the particular issue depicted. Your subscription will include the most recent issue once your subscription begins. Magazine covers are the property of the publisher. This site is not officially affiliated with, associated with, or endorsed by The Walking Dead United Kingdom or the publisher.