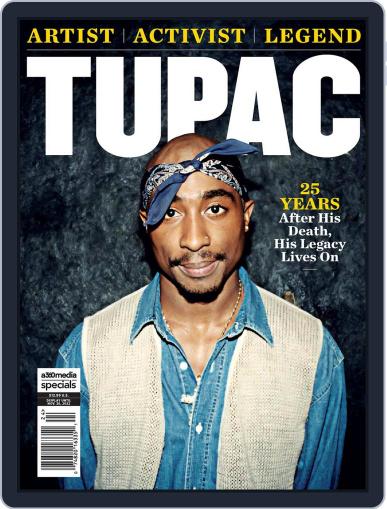 Tupac Shakur is remembered as many things. He was—and still is—one of the most successful and influential hip-hop artists ever with more than 75 million records sold. His story was also painfully sad—his life ended as a victim of violence, which he simultaneously criticized and glamorized for an entire generation of fans. If he seems to be a complex contradiction, he was. Perhaps the best explanation for the clashing forces in his life is that despite being a leader and legend, he was just 25 years old when he died. We never found out how he might mature and make peace with the world around him—or himself. This tragedy is compounded by the fact that we still grapple with most of the issues that Tupac had the courage to face and talent to express. That’s why so many still turn to his work today, not as a nostalgic escape, but as a release of deep frustration and yearning.

The number of issues included in a magazine subscription (frequency) is subject to change without notice. Additional double issues may be published, which count as 2 issues. Applicable sales tax will be added. Offer void in Vermont. Magazine covers are used for illustrative purposes only and you may not receive a copy of the particular issue depicted. Your subscription will include the most recent issue once your subscription begins. Magazine covers are the property of the publisher. This site is not officially affiliated with, associated with, or endorsed by Tupac or the publisher.