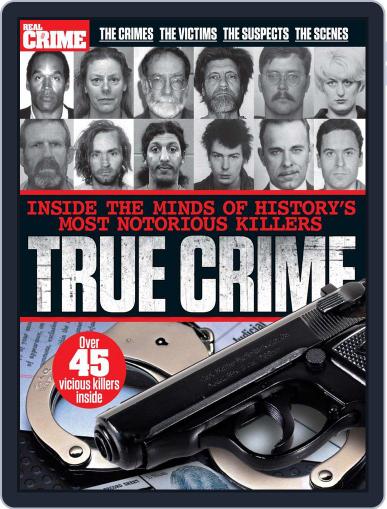 In True Crime, we investigate some of the most iconic crimes in recent history, from O. J. Simpson's 'Trial of the Century', to the monstrous actions of Edmund Kemper and Charles Manson. Featuring a host of genuine evidence, including official police documentation and unbelievable images, True Crime gives you an insight into the minds of some of history's most notorious killers. Featuring: The Death House - Take a look inside Sing Sing prison’s Death House and the electric chair dubbed ‘Old Sparky’. From the archives - Delve into the past and investigate some of history's most infamous criminals, from Ned Kelly to Charles Manson. Criminal profiles - Discover the truth behind the criminal cases that shocked the world. Iconic images - View incredible photos charting some of the most notorious crimes of the last century.

The number of issues included in a magazine subscription (frequency) is subject to change without notice. Additional double issues may be published, which count as 2 issues. Applicable sales tax will be added. Offer void in Vermont. Magazine covers are used for illustrative purposes only and you may not receive a copy of the particular issue depicted. Your subscription will include the most recent issue once your subscription begins. Magazine covers are the property of the publisher. This site is not officially affiliated with, associated with, or endorsed by True Crime United Kingdom or the publisher.