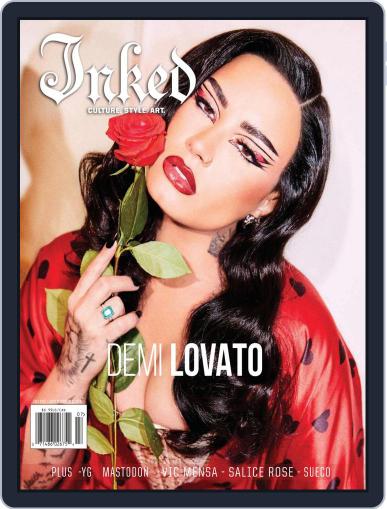 The prevailing saying about tattoos is that once you get one, you instantly begin wanting more. With Inked magazine, scout out your next tattoo idea and garner inspiration for any unique designs you may have in mind. Aside from the millions of designs and variations featured on the Inked magazine, readers can delve into the entertaining and bizarre side of the tattoo world. Considering itself to be an “outsiders” magazine, this publication is perfect for those who are cut from a different cloth.

With its debut in late 2004, the magazine went through ebbs and flows with circulation production in the proceeding years. After being purchased in 2006 by the Downtown Media Group, the magazine never managed to publish an issue. After being acquired by the Pinchazo Publishing Group in 2007, the Inked’s publication issues were finally resolved. In 2010, under the creative direction of Rocky Rakovic, the publication began featuring celebrities such as Adam Levine, Jessica White, and Adam Goldberg, leading to immediate success. Since then, Inked magazine has gained a considerable following for all things tattoos and body art designs.

Tattoo artists and enthusiasts often heralded Inked magazine as a primary resource for aspiring artists and body modifying enthusiasts. Readers of Inked can learn more about the cultural significance behind certain tattoos designs from China, Polynesia, Japan, Scandinavia, and more. Those who are looking to get a tattoo that bears personal significance can find a number of common tattoo designs that carry subliminal yet powerful meanings. Aside from the vast variety of tattoo ideas, sleeve themes, and color modifications, Inked magazine presents dozens of curious stories within every issue on how some individuals have taken body art to extremes. Learn more about the French primary school teacher named Sylvian who has over 90% of his body covered in tattoos. Get to know Michelle Di Donato, a devout Christian mother who tattooed her eyes pink. While the fascination of body art extremes are a novel concept, Inked ushers the tattoo culture out its taboo connotations and helps readers explore tattoos in a new light.

For the best prices on all of your digital issues from Inked magazine, get it all through DiscountMags. Couple unbeatable pricing with the convenience of carrying multiple issues across all of your digital devices. Look for your next tattoo design and inspiration through the foremost publication on all things body art: Inked.

Magazine covers are used for illustrative purposes only and you may not receive a copy of the particular issue depicted. Your subscription will include the most recent issue once your subscription begins. Magazine covers are the property of the publisher. This site is not officially affiliated with, associated with, or endorsed by Inked or the publisher.