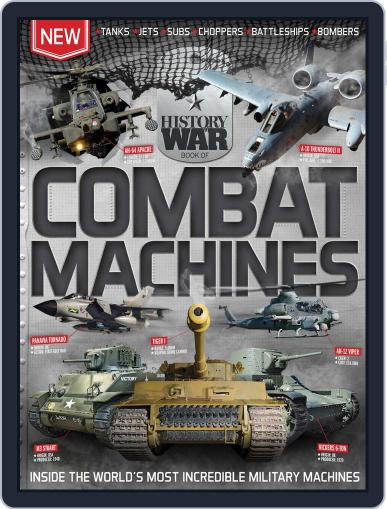 About History of War Book of Combat Machines

In the History of War Book of Combat Machines we chart the history and development of dozens of legendary military vehicles, from the fearsome German Tiger tanks of the Second World War, to the rise of the nuclear-powered submarine, to the hi-tech fighter jets that now rule the skies, to the military tech of the future. We'll show all the facts and figures you need to become a combat machine expert, as well as breaking down each vehicle to give you an inside look at the technology that makes these tanks, choppers and battleships tick. Featuring: 100 years of warfare - Discover how tanks have evolved to the military powerhouses they are today over a century. Land - Follow the evolution of the tank, from World War One to the futuristic vehicles of tomorrow. Sea - Step on board some of history's most famous battleships, submarines and aircraft carriers. Air - From attack choppers to stealth bombers, see in inside a selection of the world's most iconic aircraft.

The number of issues included in a magazine subscription (frequency) is subject to change without notice. Additional double issues may be published, which count as 2 issues. Applicable sales tax will be added. Offer void in Vermont. Magazine covers are used for illustrative purposes only and you may not receive a copy of the particular issue depicted. Your subscription will include the most recent issue once your subscription begins. Magazine covers are the property of the publisher. This site is not officially affiliated with, associated with, or endorsed by History of War Book of Combat Machines or the publisher.