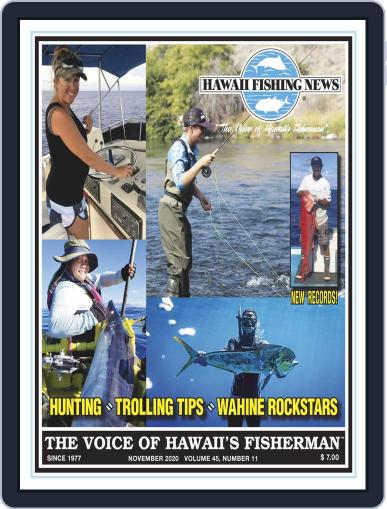 HAWAII FISHING NEWS brings it all to you! Sportfishing in Hawaii is year-round! Aptly titled by HAWAII FISHING NEWS in 1977, the "Blue Marlin Capital of the World." Hawaii offers six species of billfish plus yellowfin (ahi), skipjack (aku), dogtooth, bonito, albacore & bigeye tuna. Other species of offshore game fish include wahoo (ono), dolphin fish (mahimahi), great barracuda (kaku) & rainbow runner (kamanu,or Hawaiian salmon). Bottom fishing is also popular in Hawaii with good catches of snapper at depths of 10 to 100 fathoms. Inshore waters of Hawaii, with 700 miles of fishable shoreline, draw the most activity from anglers. Heavy-duty shore casting rigs allow anglers to tackle giant ulua (jacks) of up to 200 lbs as they prowl the reefs at night. Medium tackle and ultralight fishing clubs have sprung up in Hawaii as anglers have discovered the excitement of fishing for the many other species that make the reefs and sandy channels their homes. Freshwater enthusiasts are not to be denied as Hawaii has more varieties of freshwater game fish than most areas of the mainland; these include largemouth bass, smallmouth bass, oscar, tucunare, channel catfish and rainbow trout. What all this adds up to? Hawaii is a great place to fish!

Magazine covers are used for illustrative purposes only and you may not receive a copy of the particular issue depicted. Your subscription will include the most recent issue once your subscription begins. Magazine covers are the property of the publisher. This site is not officially affiliated with, associated with, or endorsed by Hawaii Fishing News or the publisher.