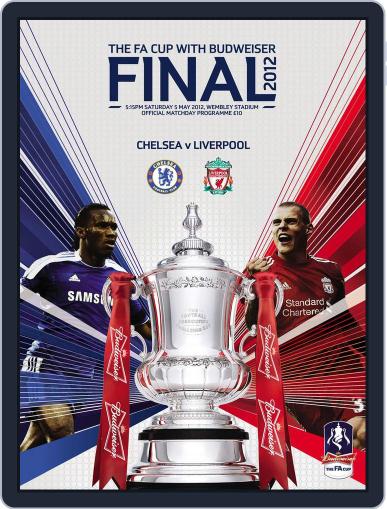 Chelsea head to Wembley after a resounding Semi-Final win against Spurs. The Blues are looking to lift their third FA Cup in four years and the official matchday programme features interviews with Roberto di Matteo, Petr Cech, Dider Drogba, John Terry and Jon Obi Mikel. Liverpool enjoyed their third win against rivals Everton and are aiming for their second piece of silverware having already lifted the League Cup. Kenny Dalglish, Steven Gerrard, Jamie Carragher, Louis Suarez and Pepe Reina explain what it would mean to do a cup double.

The number of issues included in a magazine subscription (frequency) is subject to change without notice. Additional double issues may be published, which count as 2 issues. Applicable sales tax will be added. Offer void in Vermont. Magazine covers are used for illustrative purposes only and you may not receive a copy of the particular issue depicted. Your subscription will include the most recent issue once your subscription begins. Magazine covers are the property of the publisher. This site is not officially affiliated with, associated with, or endorsed by FA Cup Final 2012 Liverpool v Chelsea or the publisher.